Skopje is a bit of a dump. There has to be a more delicate way to describe a city with some of the most impressive statues I’ve ever seen, great food, a huge and hugely impressive old bazaar and uniformly friendly people save for one jerky cab driver who overcharged me and then got pissy when I brought the subject to his attention because I was an American and could easily afford it, but when push comes to shove, sometimes the simplest terms are the best at conveying the reality before us.

The best example is Macedonia Square, the center of the city, and it really sums up the weirdness of it all. There are a dozen gigantic statues all around, on both sides of the river, which must have cost tens of millions of dollars to erect (the statues, not the river), and they’re surrounded by endless construction and trash strewn about. This photo pretty well sums up the aesthetic of the city. 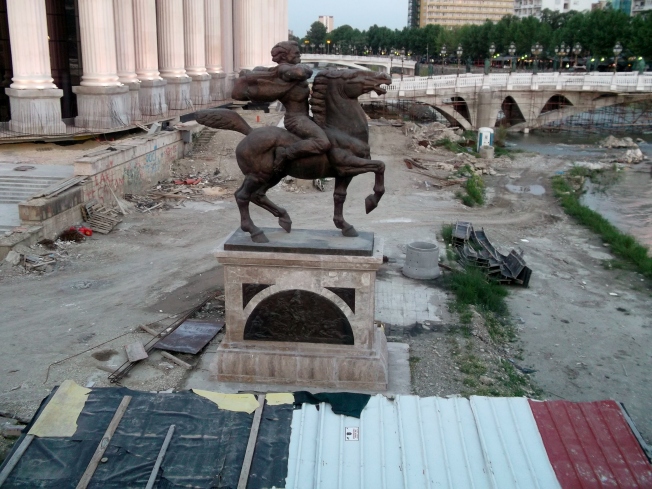 Anyway, with that travel disclaimer out of the way, let’s focus on all the good stuff in the city. Out of everything there is to see and do in Skopje, and there’s plenty, I was most interested in going to Kale Fortress, which stands on the highest hill in the city and gives excellent views of the entire city. It was built by Byzantine Emperor Justinian, the same bloke who put up Hagia Sophia in Istanbul. He was born near Skopje and like any favorite son decided to do something nice for the old homestead, though apparently the existing fortifications are made up mostly from the 10th century AD upgrades.

The fortress was damaged pretty badly from an earthquake fifty years ago, but nature has nothing on soccer hooligans. After hiking up to the top, Ferda and I discovered a sign informing us the fortress was closed, though no reason was given. We later learned from the nice fellow at the front desk of our hotel that after a soccer match a year or two ago, the fans celebrated by going to the fortress and trashing the place, and it has been closed to the public ever since. Sigh.

The city’s old bazaar is great, and it includes an excellent museum, creatively named the Old Bazaar Museum. We spent a lot of time wandering the streets, drinking tea and playing gin and tavla (backgammon) in cafes, buying cheap shoes and eating really cheap sweets. I had way too many cream puffs for about 25 Denar each, which is a real bargain given their prodigious size and the favorable exchange rate. There’d be a picture but I ate them all too quickly. Instead, here’s me on a main stretch of the old bazaar.

Ferda strikes poses in front of the exhibits in the museum. Museum visits are a serious business, after all.

Here I am attempting to document my glorious victory for posterity, but Ferda decides otherwise.

This particular trip has a very sad ending. On the return flight to Istanbul, I lost my Murphy’s Irish Stout cap. I loved that cap. But I guess we’ll always have Skopje. 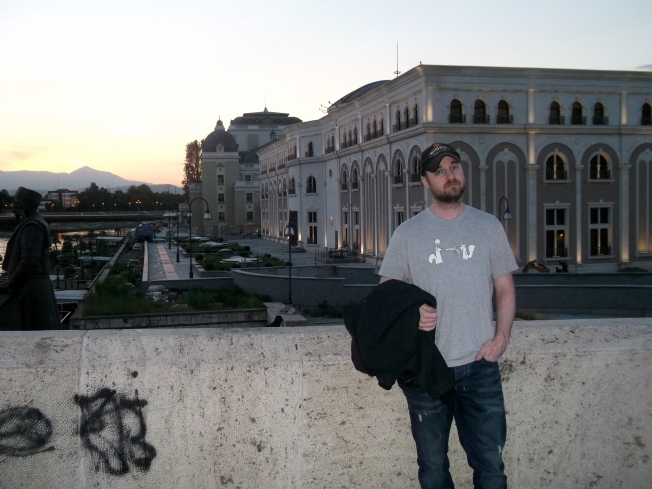 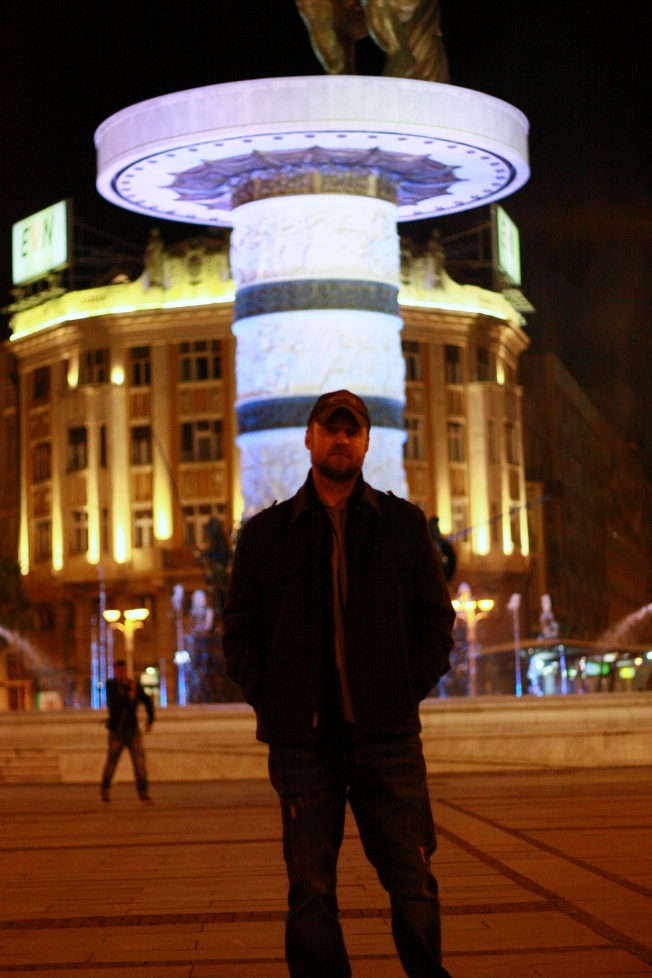 Our cab driver back to Skopje airport was a lot of fun. He had maybe three teeth left if we’re being generous, and he could not stop smiling and laughing the entire twenty-minute ride. The car itself was a disaster, a stationwagon whose best days were last seen in the 1980’s, ripped upholstery, windows that wouldn’t roll all the way up or down and random CD’s scattered on the passenger seat and floor.

Our driver, whose name I couldn’t pronounce and cannot remember, was super talkative, knew a little Turkish and a little English, which sums up Ferda and myself pretty well when I think about it. He played a variety of loud music he thought we would like, which we did not, and struggled to make it to the airport, at one point turning the wrong way down a one-way street, requiring much pointing and yelling on our part to ensure we didn’t get hit by oncoming traffic. When we finally made it to the airport, Ferda tipped him in banana. After the fact, perplexed, I asked her why she gave him a banana, and she replied, “I didn’t have any cash.” He smiled and waved while pulling away from the curb, so I sense he was pleased with the transaction.

Below is my favorite photo I took of the city square and the large statue that, due to an ongoing argument with Greece, is not Alexander the Great. Even though it obviously is.

For legal purposes, this is not Alexander the Great.