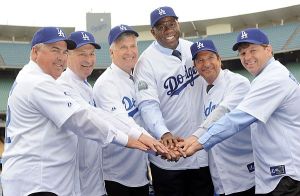 The Dodgers traded for Adrian Gonzalez, Josh Beckett, Carl Crawford and Nick Punto today, taking on over 200 million in salary for the next five years on Gonzalez and Crawford alone. The Dodgers team now only vaguely resembles the team that jumped out to the best record in baseball through the first two months of the 2012 season, and while it is unquestionably better, it comes with a price. We just don’t know what that price will be yet.

When the team was purchased from Frank McCourt for over 2 billion dollars, an absurd amount in excess of the team’s value, the question that had to be asked was how the new ownership planned on making a profit from such an investment. That question only looms larger by taking on so much additional payroll as the season has progressed, and not just with the most recent trade, but with the acquisition of other players such as Hanley Ramirez and Shane Victorino.

In 2012, parking costs $10 at Dodger stadium. An all-beef dodger dog, souvenir cup of soda, and a bag of peanuts costs $20.25. A ticket in section 44 on the field level costs $40. So for a family of four, it’s not unreasonable to expect an evening at Dodger stadium to cost somewhere in the neighborhood of $250. McCourt made everything at Dodger Stadium worse, but the sinking feeling in my stomach from the new ownership tells me the nightmare might only just be beginning.

Gonzalez is a monster upgrade at first base. Beckett is much better than Joe Blanton. Crawford might be a good player again. Along with Ramirez, who was an upgrade at shortstop, the Dodgers have invested a lot of money to make an already decent team better. That’s the good news. Altogether, those four players will cost $292 million dollars over the next five years, but the bad news is the real bill hasn’t even arrived yet.